As rightly said, Games are not won or lost because of the 11 that were selected, games are won or lost because of what the 11 do on the field.A Mangalore Cricket tournament was organized and our Under 12 boys team emerged victorious. The celebrations did not stop at that as our boys bagged prestigious titles. The Best bowler award went to Hardhik Jain 7D and Shaurya Mangala of 7B was judged as the Man of the series.The Under 14 team was one step short of victory as they were declared runners up. However, the Best bowler was awarded to Samanvay of 8C and the Man of the series was awarded to Hemanth of 9A. 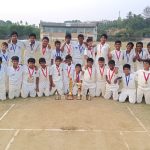